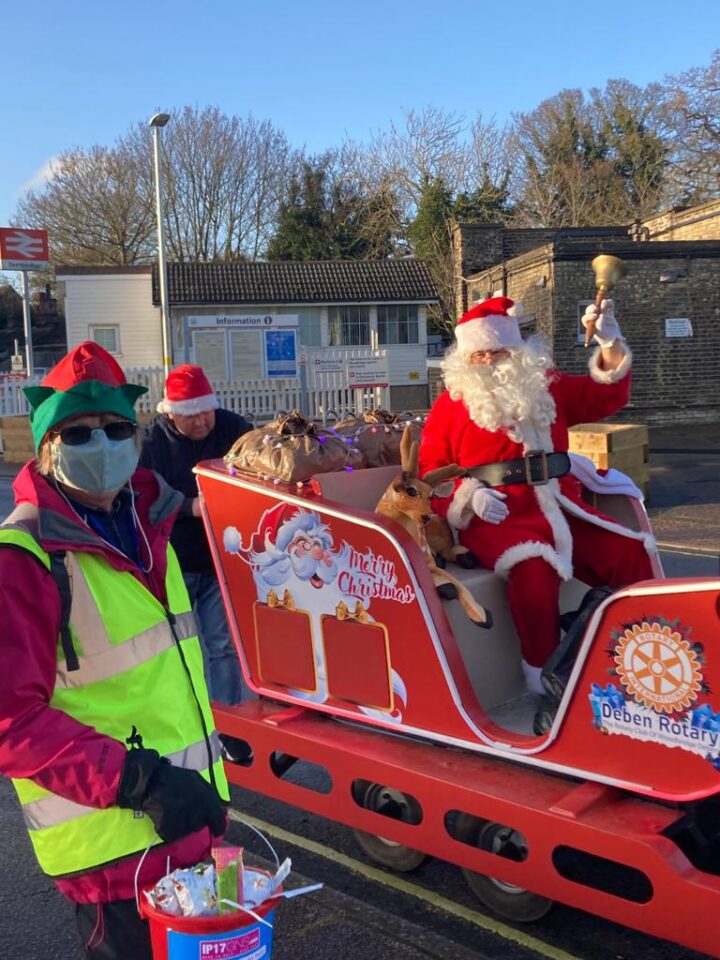 On the cold crisp morning that was Xmas day, 2019, a file of warmly dressed volunteers made their way up the hill towards St. John’s Church, Saxmundham. They were heading towards the chilly and well-ventilated, Covid-free church hall – summoned there by Di Eastman and Bryony Peall on behalf of the town’s popular community support group, IP17 Good Neighbour Scheme (IP17GNS).

The scheme was set up early in 2019 to support those affected by the pandemic. Amongst other activities the IP17 team had pulled together volunteers earlier in the year to act as ‘phone buddies’. They had kept in touch with, and supported those that were isolating and arranged for the collection and delivery of prescriptions. At the same time the group had mobilised supplies of food and goods to be shared around the town with those affected by the COVID restrictions.

Now, at the end of a horrible year, the IP17 team of volunteers were preparing to deliver Xmas magic, warmth and fine food to many residents.

In the hall volunteers were met by a row of 200 dinners, cooked in the week before by another group, frozen and then defrosted overnight. The dinners were sealed in aluminium food trays which were then packed into bags, with Xmas puddings, custard, cakes and sweets etc added – all ready for delivery. Soon, in a carefully timed operation, a team of car drivers arrived to collect and then dispatch the dinners to 197 Saxmundham residents – many of whom lived alone or were isolating.

It had been a major logistical exercise for Bryony Peall and her team.  First to identify those that would appreciate a cooked dinner on the big day. Second to assemble all the ingredients – many of which were donated by local firms [insert names?]  and farmers [check]. Then a team of volunteer cooks was assembled to peel potatoes, halve brussels sprouts, wrap mince pies, divvy up cranberry sauce, decorate cakes, and cook the turkeys and their trimmings.  The big challenge was to ensure dinners were tasty but also prepared and cooked according to both COVID and health and safety guidelines. And finally, there was the logistical task of matching dinners to home addresses to be delivered safely on Xmas Eve and Xmas Day to 197 addresses around the town.

The Xmas Day dinner operation was the climax of a series of events organised by IP17GNS to bring magic, joy and cheer to the town’s young and old over the festive season.

The season had been launched with a scheme that encouraged school pupils to create Xmas greeting cards to send to the many elderly in the town’s care homes – which brought warm smiles to many faces. Older residents responded by spontaneously returning Xmas greetings to their new young friends – showing the power of connection.

Next, and because of COVID regulations, and to the disappointment of many children, the annual event with Father Xmas in the Market Hall had to be ditched. So, in an effort to recreate the sense of magic but also to honour the season of giving, the IP17GNS team arranged for Father Xmas to tour Benhall, Saxmundham and Kelsale in his sleigh on the 19th December. To the joy and delight of so many little ones (captured on FB videos) up and down the streets he went, sprinkling magic and excitement as his volunteer ‘elves’ gave away free gifts – donated by [….] and wrapped by volunteers .

Mums were quick to comment on Facebook. “Very exciting to have a little magic” one wrote. Kerry Ross wrote: “Brilliant, well done everyone. My daughter (18) and myself were driving through Saxmundham and saw all the children waiting so excitedly for him so we had to go and find him, which we did! we were actually both so emotional, seeing those darling little ones faces. In a time like this you brought so much joy. Thank you.”

“Thank you so much” wrote Felicity Challis “great effort and my children were over the moon to see you come down our road.” Charlie Mann wrote “Thank you so much my daughters loved this. What a lovely way to start the Christmas holidays!! Xx” Louise Gissing noted that the event was  “just what the community needed – particularly today.” Julie Holden thanked the team and wrote “my grandchildren and me loved this put a lovely smile on their faces xx.”

To crown the pre-Xmas festivities a Drive-In Carol Concert was arranged at Carlton Industrial Park Estate. In a moment of inspiration, Bryony had the idea of a Drive-In Carol Service earlier in December. To help make it happen she contacted Roger Skinner, landlord of the Industrial Park. He very generously offered a space, sound systems and a stage. The vicar led the community in prayers, and a small ensemble of musicians shared the platform with the British Legion band and provided musical backing to carol singers confined to their cars. It was not quite the same as singing together in a hall or church…but those of us that attended loved it, despite the unusual venue.

These magnificent efforts by the IP17GNS team remind us all of how much we love our town Saxmundham; how dependent we all are on each other – and how by working together we can make magic, find new friends, bring joy and face the big challenges thrown at us.