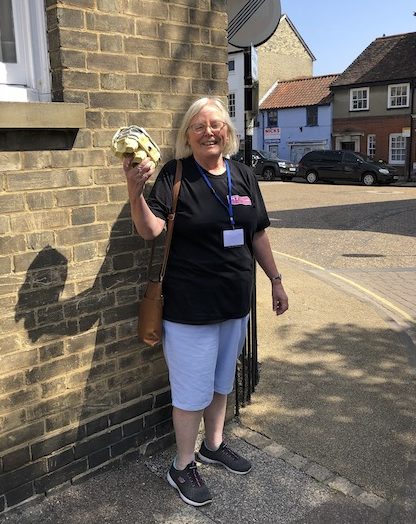 Di Eastman is a Saxmundham Town Councillor and was seconded as a trustee onto the IP17GNS management committee.

She’s a popular member of the team, frequently lending a hand to emergency food distribution and also playing an important role in the small IP17GNS communications group which looks after this website, the IP17GNS Facebook group, leaflets and media interviews.

Her reasons for becoming involved went beyond a simple wish to help;

“Why did I become a Trustee? Well, I volunteered first, and it’s the best thing I could have done.

I lost my husband in February, following a brave battle with bowel cancer and, when the Covid-19 emergency hit, I didn’t know what I was going to do with myself, as all the social avenues I was going to explore were closed to me.

Then Jeremy Smith [leader of Saxmundham Town Council] asked whether there were any Town Councillors who would like to get involved with a new charity that was being set up to help vulnerable people in the community.

It was a bit of a ‘light bulb’ moment for me.  I thought, “yes, that is would I should do” and ended up becoming the Lead Co-ordinator and also a Trustee.

I would urge anyone who maybe feeling a bit down or lonely to get involved with your local volunteer group – you will feel more positive, you will make new friends and you are helping other people, which is a great feeling and very rewarding.”